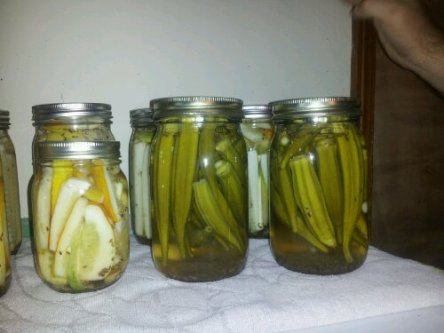 Our okra started producing a few weeks back and once it started it is going great guns. Kit likes fried okra but was not impressed with pickled okra. I tried pickled okra for the first time last year. I first tried pickled okra while working at a State Park in Texas. A couple of Park Hosts even gave me a jar as a goodbye gift. They were awesome Park Parents. I have about five half rows of okra growing. Which equates to about 500 feet of okra plants and each plant produces several pods. Several pods each week :-) Kit put up several more quarts of okra while I was work the other day. He has also put up his first harvested Lima beans and boy is he excited. Have you ever tried pickled or fried okra before? One of the transplant Kentuckians I work with confessed he had never.eaten okra.