Just before Christmas I discovered this craft called finger knitting. Okay, I might be stretching the truth. I had a pin for finger knitting, but had never tried it and found out the Instructables video (linked below) that Beffers found was much simpler. Beffers (my SiL) learned it and showed me how cool it was. As soon as she showed me what she was doing I demanded she send me the pin and help me along. Yes, demanded is the right word. I lacked the gumption ever try it. And yet, it didn’t need gumption to learn! Just about 10 minutes and then I replayed the video to make sure it sank into my brain. It makes me wonder what other gems are hiding in the depths of my pin boards. Are you a cool pin hoarder too? 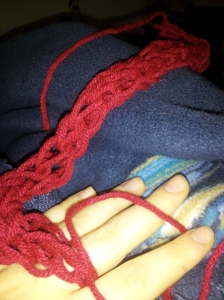 Here is the link to the sweet tutorial video. Before you click I want you to know that the video is a little odd as it is shot upside down and the maker of the vid at one point misidentifies her fingers. Just keep watching what her hands do and don’t worry about silly little things like a mix up in words. Instructables wins again!

There are many different things you can do with your finger knit projects depending on your level of creativity. Bracelets, scarves, and (my favorite) Christmas tree garland. 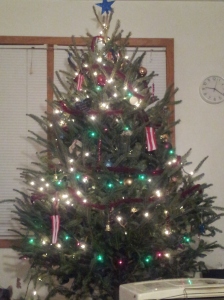 Beffers followed the tips on this website, the blogger made several different strands of different colors and then laced them together to make a beautiful rainbow scarf. It helps that Marlena has phenomenal hair to go with her lovely rainbow scarf. Instead of making a rainbow scarf, Beffers knitted orange and gray together then laced the strands to make a huge fluffy scarf to match the handmade hat her hubbster had received as a gift the previous year. You gotta love handmade matching fashion! 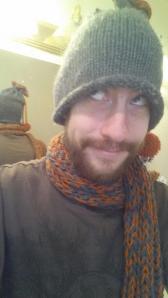 A couple of quick tips to add to the awesome bloggers and instructors there already are out in the world. To take a break and save your work put your finger loops onto a chopstick. I was going for marathon knitting and couldn’t avoid a potty break any longer so that tip really helped me. If you are teaching a younger person or it is your first time trying finger knitting, avoid the fru-fru fancy yarns and just pick a no frills yarn to learn. Later on you can do the fancy stuff but it is important to learn it at first.

Let me begin by saying this movie is much more of a drama than a horror. The horror lies in the social fears related to abortions and female bits. I promise that I will not share any gross out photos. I will however discuss, as politely as possible, some of the elements related to the story. Unless someone eating normal looking food grosses you out. If you wish to see some of the more graphic images, there are plenty, just do a quick Google search. I will admit that the nastiest scenes did give me pause while I chomped on my fried potatoes, but not much. I was too busy being impressed with the props and special effects team. Yes, it looked that good….Or, bad.

Alright, let’s back this dumpling train up.
Super Simplified Plot: A retired aging actress seeks the help of a witch doctor to regain her youth and regain the love of her cheating husband. The secret ingredient in the witch doctor’s magical dumplings are human fetuses.

Ms. Li--The retired actress that will pay any price to get back her youth. Just look at that B-face she is throwing out

Aunt Mei–I call her the witch doctor, but in the story she is a crazy lady and retired  who lives in the seedy part of town.

Mr. Li–A jerk. I mean, I know everyone in this movie is crazy or evil, but he really is. If there is a woman in his vicinity, he will have breathy gross sex with her.

Dumpling Movie Spoilers—–Scroll Down at your Own Risk!

Cute Mr. Dumpling wants to warn you of SPOILERS BELOW!!