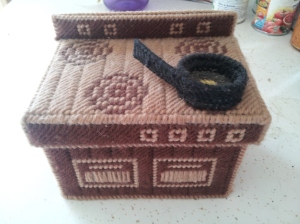 Several years ago, my mother in law gave to me and my husband a cute box of recipes belonging to Kit’s Aunt.
I have browsed through it but never took the time to pull out a recipe and collect up the ingredients. There are some from magazines and some from memories long ago. Getting into the season of epic cooking, I took another look through the recipe box and have decided to try and pull one or two recipes out a month and give them a whirl. I would love to do one each week, but knowing me, I will fail at it if I make promises.

So, what have I chosen for my first tester recipe? Eggnog cookies. I never knew such a thing existed, but I’m excited to try it. The chicken pot pie is a recipe that I found online. Apparently, I never wrote down the recipe that I used for last year’s pies. I have a stellar crust recipe and I know the veggies and chicken are just keep throwing it in until you run out of room. However, broths and gravies always make me a little nervous. Seasoning and consistency mostly. The recipe I chose to follow is one I found through Pinterest and the source is Instructables. I love that website and had no idea they had Instructable recipes. I can’t vouch for the recipe as a whole, but if you use recipes as a guideline then it will be perfect for you too. Here is the link to the chicken pot pie Instructable recipe.
I plan on adding broccoli, carrots, onions, garlic, mushrooms, squash and whatever other veggie I can find to the pot pie. I plan on serving the pot pie with fresh spinach salad. A nice crunch to go with all that chickeny goodness.

Apparently Eggnog Cookies are just a Google search away. How have I never heard of them before? I’m kinda pumped because from the recipe it looks as like an amped up, more flavorful version of sugar cookies.
I can tell ya right now, that I will be increasing the amount of cinnamon. Much like garlic, they don’t list enough on recipes.

Hubbster and I had the great debate trying to decide if we wanted to try Eggnog cookies or Oatmeal cake. Oatmeal cake looks dead easy so it will be on the menu sometime soon. This aunt loved her cakes and pies, that is most of the contents of the recipe box. There are some savory recipes, some sides and several pickle recipes that we will have to try next summer too.

Have you ever made eggnog cookies before?
Do you have a go-to recipe for pot pie or do you mix up the veggies each time?

This was the main course of the meal in a small town called Obanos (Oh-bahn-nose). If it looks like a mystery meat drowning in a peculiar sauce then you’d be spot onto how it tasted. It was supposedly chicken, but the other folks who ordered beef got a similar murky looking plate. Thankfully, I had filled up on the previous soups and starters before the main course. No pix of the starters—that’s how good it was!

The dessert at Obanos was good, but I wasn’t sure where to put it. I believe they called it tiramisu? I can’t recall. It was a good cake with super sweet raspberry sauce and fluffy whipped cream. 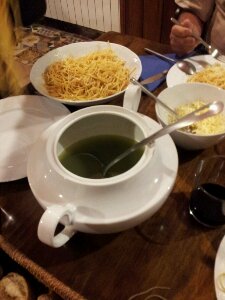 The meal we had in Cirauqui. Although the Spinach soup doesn’t look like much it had a phenomenal flavor! It also warmed us straight to the bone. The dining room was a little odd as we went downstairs to the basement underneath the hostel to eat. It was a very nice dining area.

In Estella, we checked into our albergue and went in search of food. Yan (our friend from China) knew a good place to eat and we did eat well!
We had sandwhiches and gobbled our weight in patatas bravas. Brava has many meanings, so I assume the translation would be hot potatoes. Fierce potatoes sounds more awesome though.

Yan–ever brave–ordered this to share with us. I was shocked that i liked it. I ate it, but was quite hesitant. This was squid and the sauce was made from its own ink. The sauce and meat were both good. I ate it on a crust of bread. Too fishy for Jess’ taste. 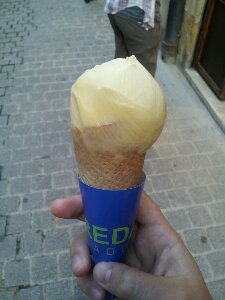 Ice cream or helado (el-ah-doe).
Mango flavored! It was so good! Very creamy with that unmistakable fruity mango flavor. It wasn’t a super common flavor, but we did find it in many of the ice cream shops we went to.

Green soups seemed to be a common starter when we ordered the Pilgrim’s menu along the way. Although the presentation was better than some we ate the flavor was not as complex. The hostel was being run by two couples from Holland. They spent 3-6 weeks working there then another set of people would come run the hostel.

Pasta was the typical second or main course in the Pilgrim’s menu. This was some sort of bolognaise sauce–or so I was told by my more traveled eating companions.

A custard was a typical postre (poe-strey). It was a surprise when we got bread pudding. I make bread pudding so I am a bit particular. I was satisfied with the quality–the whipped cream was yummo too. The people from Europe at the table were more wary of it than I expected.

My coworker told me I had to try paella (pie-eh-yah). Which, near as I can tell, is a baked skillet of saffron rice and some sort of meat. I wish I could have found some grandmother to make it for me. Homecooking always wins. This was quite good and makes me want to experiment with saffron.

This was an adventure of a meal. Yan, Daniel (hiker from Sweden) and I met our new friend and hospitelero (hostel host) for supper in Logroño. He decided to order for us and we all ate family style. This is how we ended up with a salad that included a goat cheese (I think), a balsamic vinegar dressing and thin slices of cooked duck. The duck is what looks like the purple slices of meat. It was an awesome salad. I ate mostly that.

Blood sausage. Despite its terrible appearance and name. It tasted much like liver; that high in iron taste. It was mixed somehow with rice so I’m not sure what order they did things in to make it taste the way it did.

More of the fancy pinchos (similar to tapas) we ate wers octopus on bread with other veggies. It was delicious and I would have gotten another one if they had more. can you see the tentacles!?
The ordering style at the bar involved pointing and stating a quantity. Because of that, I have no clue what they called this type of food. It was pulpo something. Pulpo just means octopus.

Along the Way we ate at an outdoor oven cafe. It was lovely and their food was flavorful. Jess got the asparagus pizza and she was lucky I didn’t steal it from her.

There was too much good food for one blog post! I am splitting this into two parts so I don’t make my readers too hungry. So wipe away the saliva, fix yourself a PB&J and wait for another post about food that is coming soon.

Made myself some cake!
It’s not gluten free, sugar free or in any way healthy. Move along, healthy folk, this is for people who enjoy being fatties.

Ingredients
1 box angel food cake
1 can (20 oz.) crushed pineapple in its own juice

Directions
Throw everything in a bowl and combine well. Enjoy the awesome foaming.
Scrape/fold into a 9×13 pan and bake 350°F for 30-35 minutes.

I must admit that I ate most of the pan. My hubster was lucky to get a few pieces. The crushed pineapple is perfect in this cake mix because you get little juicy bits between bites of fluffy, moist angel food cake.

I ate cubes of Cheddar cheese with the cake and was surprised with the results. The sharp cheese mellowed the sweetness. I didn’t eat them in the same bite, rather I traded bites back and forth. I know it sounds weird but it was quite good.