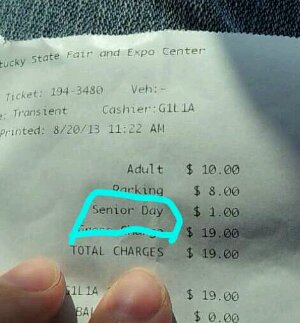 We went to the state fair for Kit’s 45th birthday. The young man who tallied up our prices assumed we owed one adult, one senior and one parking fee.

Kit was tickled at first because we saved $9 on his ticket. Then the rest of the day he was worried that he looked over 55 (how old you had to be to get the discount). 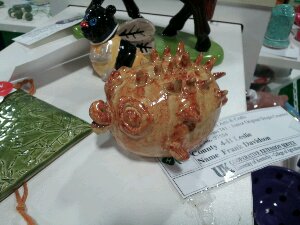 Check out this impressive ceramic piece we saw in the 4-H section of the fair! I love the design, colors and all. It was the only puffer fish we saw in the whole 4-H area.
I took some other photos of the embroidered crafts, but somehow the camera didn’t save them.

Check our this fancy little show piece tractor. It doesn’t run, as I first hoped, but it is still super cute.
Notice Kit’s backpack, we filled it full of two kinds of cheese snacks, sandwiches, water and granola bars. This way we saved about $20 on fair foods that would leave us lethargic. We saved our coma inducing foods for after the fair. 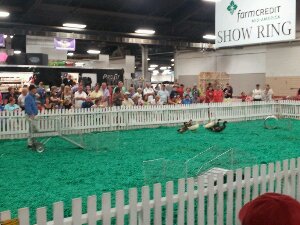 We hung around the ring in the wing alongside the cows to see Miller’s dogs working. We got to see six ducks herded under and over wire bridges by six excited border collies. Watching working dogs is fascinating and strange to me. Their owner also showed how they worked following word commands and whistles. They followed both styles of work commands seamlessly. I can’t wait for the next cattle dog on our farm. Geena was Kit’s favorite working dog and sadly, I never got to meet her.

A few adorable Boer goats, snuggling the afternoon away. Most of them were gone, judging began at 9am eastern and by afternoon there were only a few stragglers.

There were mountains of veggies in the produce room in addition to this lovely tomato collection I already shared.

Check out these cucumbers! Despite what the sign says I believe these are pickling cucumbers not pickled. Can you believe how tiny they got those Mexican gerkins? Wild stuff.
Speaking of wild and weird. I don’t remember a “critters” division from last year: 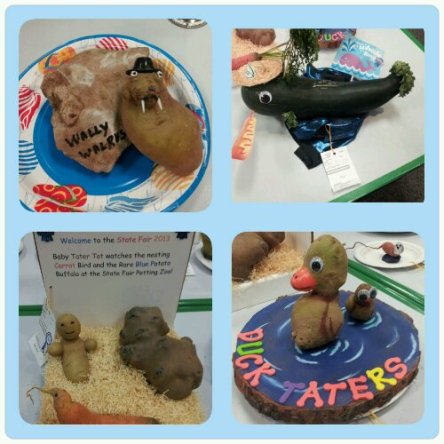 Top left clockwise:Wally the Walrus potato, this was easily my favorite and I just kept giggling at his little face. The next guy up didn’t have a cunning name that I recall, but it made a very cute whale. The baby tater tot was watching over the blue potato buffalo and the carrot bird at the state fair—they had an entire story to go along with it!
Lastly, the Duck Taters, I was thankful not to see another lame reference to the TV show that shall not be named. The duck bill had be giggling like a kid as well.

The final impressive thing in the veggies room were the entries for the largest pumpkin contest. Please note, first and second place are both in this photo. First place is the large orange pumpkin weighing in at 1,034 lbs and 2nd place is the white/ghost pumpkin weighing in at 94 lbs. Holy smokes people!!
The thing to keep in mind about this behemoth is that the tiny looking pumpkin sitting at the feet of the blue ribbon winner would make pumpkin pies 1,000 times better than its competitor.
Alas, we weren’t judging flavor.

After looking at all this food we had to bust open the backpack for lunch. Then my phone died and I was forced to take photos on my actual camera. 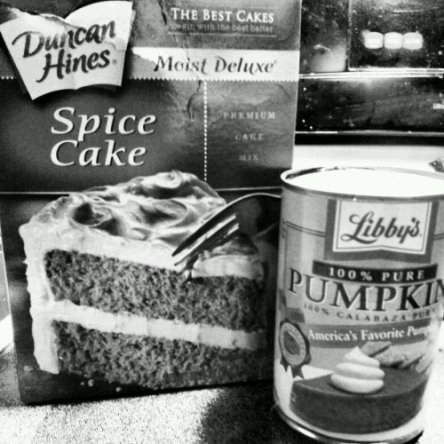 The original recipe is simple.
It states that you need two ingredients. Just the can of pumpkin and a cake mix.

I must admit that I am a non-believer. I tried but my mix was still mostly powder. I added an egg and a dash or two of water until it looked more like cake/muffin batter.

Oh yeah….I am also not on weight watchers. Big surprise there, right?
So I added chocolate chips.

And you know what I discovered?
Everybody on Pinterest is right, they are the best muffins ever….with a bit of tweaking.

Note above I didn’t use a dull yellow cake either. I used a spice cake mix because if I was making a pumpkin pie I would have added pumpkin spice. Much less trouble than getting my measuring spoons dirty.

Snatched this picture in Kmart the other day. From the angle I took this photo you can see the trick or treat buckets and fake Christmas tree forest. Just behind me are the turkey table centerpieces and Thanksgiving doodads.

I’m not trying to hate on Kmart. This is the way that large chain stores do things. I know many people that begin Christmas shopping in August so I can’t entirely blame the big department stores for trying to sell trees in October.