Over Christmas and New Year’s I got exposed to some new-to-me music, movies, games, and books. One game especially kinda pulled it all together. There’s a card
game named Slash in which you try to find the best mate for each character. All the character cards are from TV, movies, and books. This brought to my attention to how many cards I needed to discard since I was at a loss as to who or what the character was.

I would love to get recommendations for all types of media in the new year. It is so readily available but it’s like diving into the middle of the ocean. Where to begin?
It doesn’t have to be new media either. For example, I watched Die Hard just before Xmas for the first time. Alan Rickman makes a cool bad guy and I hope he’s enjoying some peace just now. Oh, and dear god, get that cop some shoes.

So, can you recommend some media to me?

Here are a few things I’ve been taking in recently:

Please leave me some recommendations in the comments below. I would absolutely love all input! I can quickly do a search and read a quick blurb on the media you suggest, but I would much rather like to know why are you recommending this? I assume because it was good, but it is thinky, inspiring, funny, great for a party, perfect with a cup of tea?

I was using this other job I hated as an excuse to not cook, clean or blog. I was depressed.
Then I quit.

I quit that lame job at the end of March. Why am I still spinning my wheels?

How do you, readers, make yourself go exercise, clean house, blog more or be a better human in general? My brain is an excuse machine.

I realize I should just do it. A million obligations–mostly social–pull me in different directions.

So, I ask again. How do you make yourself do something that you know you like? How do you get started?

Unlike school kids, most of my reading goes on during the fall and winter. These times of year are when things begin to slow down. Less work, on and off the farm, and less to do out of doors–if you’re cold natured like me.
As things have slowed down, I have gotten to hang out with some of my siblings and our conversation circled around to, What books are you reading?
Sadly, my answer was, nothing. 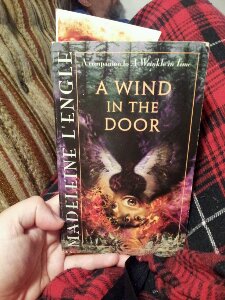 So, I have made a point to change that!
I am rereading this L’Engle book. A Wind in the Door. I read it as a kid and just began re-reading it this year. I still had a bookmark in it from months ago and found it wasn’t very hard to jump right back into the story.

It is a tiny book, somewhere around two-hundred pages. So a great way to get back into a regular reading schedule.

My sister loaned me a copy of a new manga she has been reading and really loves. Bride Story by Kaoru Mori.
Even my mom likes this manga, so I am pumped to find out what she is so enthralled with.

What are you reading right now?
Need some inspiration?

Your Next Read
Or try What Should I Read Next?
I found these websites accidentally on Pinterest and love the idea. Type in a book you have read and liked, it will find a list of books similar to it. My results from the second website showed some similar books I love and some new books I have never stumbled on.

Make some tea and take some time to read today.

You may recall one of my recent blogs about Fixing the House. The epic continued as we stripped off the trim and molding—and I found out we would definitely have to repaint it. Again.—We must have vacuumed about five times to make sure there weren’t a ton of loose bits on the floor. Then we starting unrolling, sticking down and cutting tthe foam underlayment.
I said, “HT, hold the roll up so I can cut along the wall.” And the above picture was her response. I made her hold the pose as I ran for my phone and the hilarious picture of her above.

After much grumbling, measuring and consultation of the instructions, the first row of boards were laid down. I have to give a shout out to Kit on this one. He read the crummy instructions, got all the tools, measured, cut, hammered and more to get that floor in. He is great! 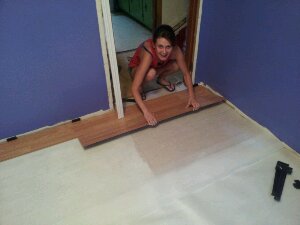 Don’t let the pictures fool you, after the first few boards were put in HT and I went to fix a massive pot of spaghetti, breaded and baked mushrooms (very loosely based on this recipe) and a green salad. Another friend came over because he wanted to learn how to install this type of flooring. Kit and I got tons of work done with such willing helpers! 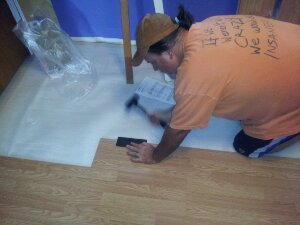 Kit worked quickly and well. We finally took a break for supper and decided to pick it up the next day. That’s when I helped the most, because everyone was at work on in school. 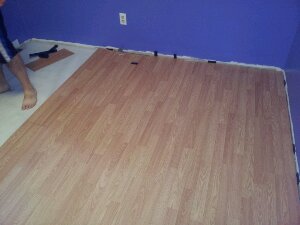 The flooring was tedious, there was a lot of fudging and techniques you had to learn along the way to make it work. The last piece wanted to be a monster, but Kit finally make it happen.
Thankfully, after all the cursing, we finally have a completed laminate floor!!
Supper was slamming too, by the way.

Until next time,
Kat

As I gain more followers I am becoming more and more nervous about cursing on my public blog.

Cursing is a normal part of my life, but I also don’t need it to get across my ideas in the blogosphere.

I want to sprinkle my blog with curse words. On the other hand, I don’t want to send half my readers running and screaming in terror at my vulgarities.

A) Curse whenever I please, internet people be damned!!

B) Warn readers, at the beginning of vulgar blogs and attempt to omit curse words when possible.

C) Never Curse, which will leave you with a still humerous, but much more edited and conservative version of myself.

What should I do?
I need your help, readers.