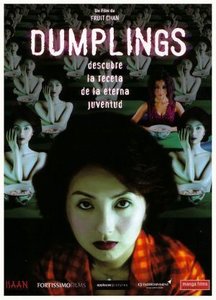 Let me begin by saying this movie is much more of a drama than a horror. The horror lies in the social fears related to abortions and female bits. I promise that I will not share any gross out photos. I will however discuss, as politely as possible, some of the elements related to the story. Unless someone eating normal looking food grosses you out. If you wish to see some of the more graphic images, there are plenty, just do a quick Google search. I will admit that the nastiest scenes did give me pause while I chomped on my fried potatoes, but not much. I was too busy being impressed with the props and special effects team. Yes, it looked that good….Or, bad.

Alright, let’s back this dumpling train up.
Super Simplified Plot: A retired aging actress seeks the help of a witch doctor to regain her youth and regain the love of her cheating husband. The secret ingredient in the witch doctor’s magical dumplings are human fetuses.

Ms. Li--The retired actress that will pay any price to get back her youth. Just look at that B-face she is throwing out

Aunt Mei–I call her the witch doctor, but in the story she is a crazy lady and retired  who lives in the seedy part of town.

Mr. Li–A jerk. I mean, I know everyone in this movie is crazy or evil, but he really is. If there is a woman in his vicinity, he will have breathy gross sex with her.

Dumpling Movie Spoilers—–Scroll Down at your Own Risk!

Cute Mr. Dumpling wants to warn you of SPOILERS BELOW!!