Recipe by request from several of my Facwbook friends

If you have a deep dish pie plate, you’ll need a little more of everything.

To put it together,  crush the cheese crackers and add butter to make the crust and sautée the onions (with salt, pepper and red pepper flakes).

Layer the cooked onions with shredded cheese in the pie crust (I usually start and end with cheese).

Then mix the milk and eggs with salt and pepper and pour over top. Poke through the onions to let it sink in and add more milk if It looks like it needs it. Bake at 375° for about 30 minutes, or until set.

This is very similar to a quiche and great for cheese and onion lovers. 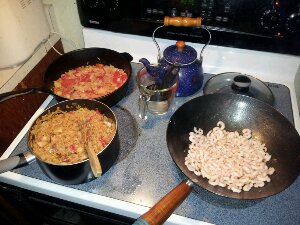 Edit: Recipe loosley inspired by this one.
Paella=pah-EH-yah.
The double L is pronounced like the Y in ‘yet’.
Paella is a Spanish dish with the main players being rice, saffron and different types of meats. Typically a mix of seafoods, chorizo, or chicken.
To me, it is a Spanish version of jambalaya. Don’t tell either ethnic group I said that, it was not meant to be a slight on anyone’s cooking.

I wanted to make something special for our 2nd wedding anniversary. For my version of paella, I cut some corners that helped me save time in cooking, but definitely did not show in the final product.

I used pre-spiced box rice mixes rather than plain white rice. And I used paprika in place of saffron. Initially, I wanted get fancy and use real saffron, but there were no grocery store options under $18. Maybe next time, Mom mentioned she had some saffron in the back of her spice cabinet somewhere.

• Two 12 oz. boxes of jambalaya rice mix (Tony’s or Zatatan’s)
• Water and oil/butter as called for on box 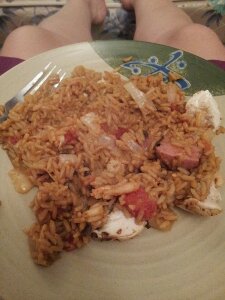 Step One
-Follow directions on jambalaya rice boxes.
-At the end of the cook time, do not worry about complete tenderness or all water being cooked away.
-Allow rice to rest.

Step Two
-Sprinkle chicken breasts with poultry seasoning, salt and paprika.
-Grill chicken and smoked sausage. Note: You could also bake or pan fry these meats, whatever you prefer. Basically, get it cooked up!
-Once fully cooked, chop up meat into preferred (bite sized) pieces and mix into cooked rice pot.

Step Three
-Toss spices, minced garlic and chopped onions into a large wok or skillet with olive oil and cook until transluscent.
-Add undrained can of diced tomatoes and cook for about five minutes.
-Dump skillet contents into pot with cooked rice and combine well.

Step Four
-Dump shrimp into skillet.
-Cook for about five minutes.
-Mix shrimp into rice pot reserving 1/3 or 1/4 of the shrimp for a topping. 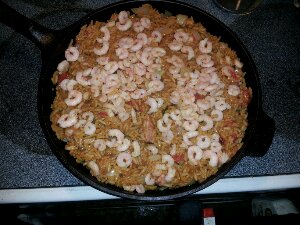