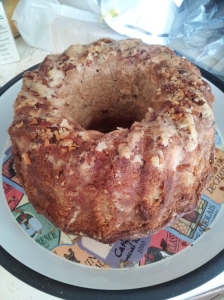 A humungous THANKS to Scottyboy & KatyGirl for asking Kaylee from Life Chasers to share her Nutmeg Spiced Pear Cake recipe. This blog was a couple of years old but it was exactly what I needed!!
Recently, I did some reorganization in my cabinets. I pulled all the oldest canned goods out to our wire shelving and put the newer items in the cabinets below. When I pulled out all the older cans I noticed I had six cans of sliced pears in juice. Uh, why? Why did I buy six cans? I like pears, but why do I have quite so many? I refuse to throw out good food and I knew I wanted to make them into a dessert, specifically a sweet bread for Kit and me.
After many, many Google, Pinterest and AllRecipes searches I stumbled on the above linked recipe and added my own tweaks. Below is my version of the recipe and I will make comments below the recipe why I chose to make those changes.
Spiced Pear Bread

My changes from the original linked recipe:

This was an awesome recipe
and you can bet your bunts I will be making it again!