After our first long day of hiking we enjoyed a big Pilgrim’s meal at one of the two cafes in Roncesvalles. The pasta, wine and bread was gobbled quickly, but Jess and I both had to pause before digging into our fish. Neither of us were experienced with eating too many fish bone-in. Luckily, we had awesome dinner mates at our table. They were patient and encouraging while we fiddled with forks and fingers. After our first few bites we needed very little encouragement to continue.

Like I mentioned, the pasta was typical part of the pilgrim’s menu. Some were better than others. After hiking all day, we ate every bit and slept well with full bellies. 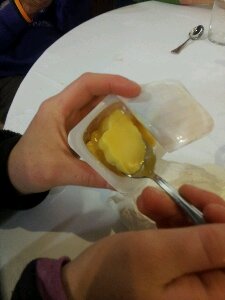 We had several different types of pre-packaged desserts. The cup of flan was on a quality on par with the snack pack pudding cups. A Spanish couple at our table taught us how to flip the cup and hit it against the heel of our palms before opening. This knocked the sugary caramel syrup down so it blended better. 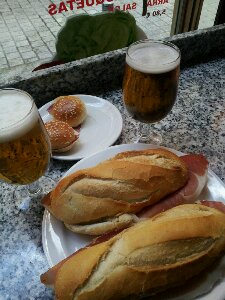 Museo del Jam on was a chain fast food joint. It was a novelty to us in that everyone stood at the bar or around the shop-there were no seats. During busy times, you couldn’t stir them with a stick. It was a mingle, eat and drink type place. The most popular menu choices were dirt cheap. We bought bocadillos (boe-kah-dee-ohs) and glasses of beer. The bocadillos were thick, crusty sandwhiches with a thin slice of Spanish style ham in the middle. 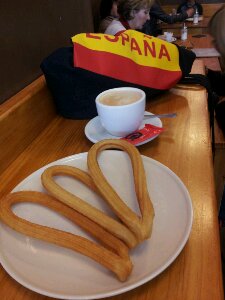 I wish I had gone back to this cafe when I wasn’t jetlaggin’, but it was still good. We had fresh churros, coffee and hot chocolate.
We could see the cook pulling the dough, twisting it and dropping it into the fryer. 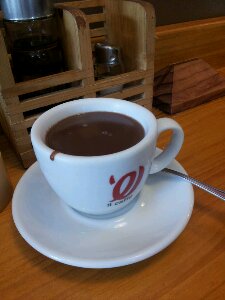 The hot chocolate was a bit of a surprise. It was perfect for dipping churros, but was almost took much of a pudding conaistancy for drinking. 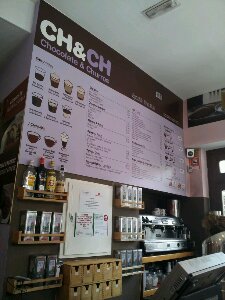 The fun Spanish and English menu for the Churros y Chocolate that we went to in Spain. After looking at the menu, I pretty much wanted everything. 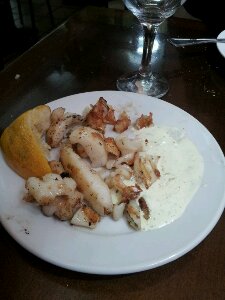 This part of the meal was a surprise to us. We ordered it, I loved it. Then we looked it up on my phone back at the hostel.
“Sepia plancha” is grilled cuttlefish. Cuttlefish are boss at camouflage so I felt a little bad, but it tasted so darn good. The consistancy was similar to scallops or squid. 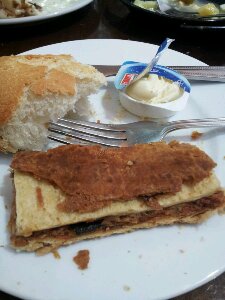 We also split an empanada for our first meal in Spain. It was yummy too. Perhaps I could make empanadas here at home. Anyone know an easy version of this?

At the same meal were some veggies in a light vinegar. They had a good flavor and a nice crunch. Much like a salad served before the meal and along with the bread. 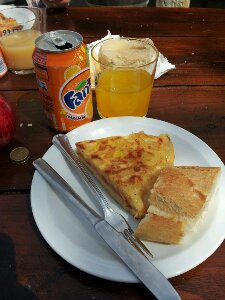 Along the Way, we stopped at a cafe that had an outdoor oven where they baked pizza, tortillas, and other good things. A tortilla in Spain is an omelet. Believe it or not, even the Fanta soda tasted different.

Fell in love with an adult beverage while I was in Spain. Apparently this is a thing in USA too, I just didn’t have a clue.
In Spain it is called a pica or clara and in the U.S. it is called a Shandy.
Whatever you call it, it tastes awesome! Fill a glass half full with light beer and fill it the rest of the way with lemonade. Best cocktail ever. I have been drinking them at every opportunity since I have been home.